A Hindu girl accepts a marriage proposal from an Afghan boy. She neglects caution from her parents, wellwishers and resists opposition to the marriage from them. She secretely marries the Afghan boy and elopes with him to the Afghanistan. She converts and takes a Muslim name as ‘Sayeda Kamala’. She lives in the joint family of her husband with three brother in laws, their wives and children. Soon she discovers, shockingly, that her lover-husband already married and that he still continues living 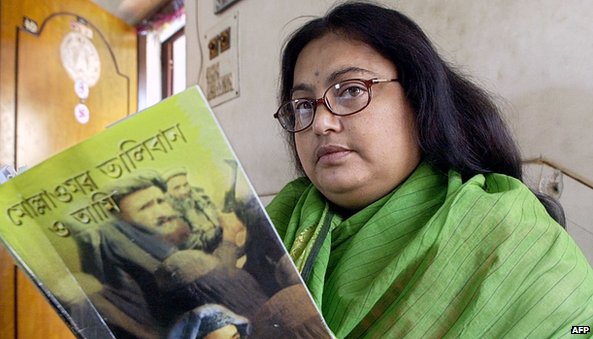 with her. Still she reconciles and continues to live in Afghanistan in ancestral house of her husband. She is a trained nurse and she decides to help women of her surroundings with her knowledge. But, the situation in her surroundings is very restrictive to women due to rapid religionalism of Afghan society. She privately provides counselling to sick women. Taliban Islamists find her clinic and orders forcible closure. She resists. And she is beaten in her house by outside men in front of her family members. She was given punishment of death. But, she escapes from her village with great difficulty. Reaches Kabul andl flees back to India.

She writes many books, gives interviews, talks freely about anything and everything freely. After few years, she decides to go back to Afghanistan. Probably, she was given assurance by her ‘loving’ husband and family members of her husband. Probably, they were forced to bring her back to Afghanistan. For some reason or for a combination of reasons, she returns after 18 years.

She starts to work as a health worker. One day, within few months of her arrival, armed men enter her house. Tie her husband and abscond with her. Later, near a Madrasa, her dead body is found next morning. The corpse had 20 bullet holes.

Committment to love, conversion to another religion, and tolerating a polygynist husband could not even ensure safety and life of the girl. The girl was Sushmita Banerjee who died as Afghan Sayeda. Conversion and Islam, compromise, sacrifice, and perseverence could not save the Hindu girl.

In India, discussion about Kashmir almost always ends in a confusion due to lack of consensus on every single issue related to the crisis situation. This is due to the illogical arguments floating in the public domain, sustained misinformation campaign by vested interests and lack of awareness about reality.   The objective of any Kashmir related activity should be

1. Set out clear objectives for a debate, or for an initiative.

2. Provide valid information, arguments and insights leading to the realization of objectives.

Kashmir is a long standing security concern for India. Pakistan is waiting for a suitable opportunity to annex Kashmir. Unrealistic assessment of Pakistani establishment has been exposed in previous wars – but Pakistani society as a whole has not learnt any lessons so far.

China and other global powers are responsible for complicating the Kashmir problems for India. Lack of awareness about the problem, lack of consensus on various issues of Kashmir among Indians can be cited as main problems faced by India. This page provides  lists resources to address these problems

What is Happening in Kashmir – NOW

AGITATIONAL TERRORISM – is adopted by separatist forces and expressed through exploting Islamic religious sentiments in Kishtwar district.  On the day of Ramzan, a communal riot broke out in which shops and houses of minority Hindus were targetted by anti Indian Muslims who were carrying Pakistani flags for the Id prayers.   Two relevant reports in this regard – by Samvada.org  and by South Asia Intelligence review

kashmir-medsyn : a blog on Kashmir by media.syndicate. Intended to individuals who would like to take a sensible stance on History of Kashmir, disputes around the region and proposed newer arrangements.

The discovery of a trove of insects preserved for millions of years in amber raises new questions about how long India was isolated before it joined the Asian continent, researchers said in a new study.

The insects — bees, termites, spiders, and flies — had been entombed in the vast Cambay deposit in western India for some 50 million years.

Scientists had long assumed that India was for a time an isolated island-continent, and consequently expected that the insects found in the amber would differ significantly from those elsewhere in Asia.

But researchers wrote in their study appearing in Proceedings of the National Academy of Sciences that the insects were not unique as would be expected had India been sequestered for as long as they originally believed.

“We know India was isolated, but when and for precisely how long is unclear,” says David Grimaldi, curator in the Division of Invertebrate Zoology at the American Museum of Natural History.

“The biological evidence in the amber deposit shows that there was some biotic connection,” he wrote, suggesting that an extended separation would have given rise to a unique flora and fauna.

India separated from present-day Africa and after about 50 million years collided with Asia, creating the Himalayas.

Rather than finding evolutionary ties to Africa and Madagascar — land masses geologists say India was most recently linked to — the researchers found relatives in Northern Europe, Asia, Australia, and the Americas.

“The amber shows, similar to an old photo, what life looked like in India just before the collision with the Asian continent,” says Jes Rust, professor of Invertebrate Paleontology at the Universitaet Bonn in Germany.

“The insects trapped in the fossil resin cast a new light on the history of the sub-continent,” said Michael Engel, a professor in the Department of Ecology and Evolutionary Biology and curator of entomology at the University of Kansas.

“What we found indicates that India was not completely isolated, even though the Cambay deposit dates from a time that precedes the slamming of India into Asia,” he said. “There might have been some linkages.”