Propaganda by definition is spreading biased information for the purpose of promoting some cause. It helps in creating and strengthening an environment which is conducive to take steps towards the goal that it is intended to achieve. Understandably, a typical propaganda will create some negative consequences and subsequently undesirable situations. To understand and reduce ill efects of any propaganda, the extent of damage it has already created has to be assessed.
In any propaganda, there will be two groups – propagandists, those who design propaganda and the target group – those who are recipients of the propaganda.
In this context, it is instructive to list the stages of progression of a propaganda. To decide on how to tackle the ill effects of the propaganda, the first step would be to identify the maturity level of the propaganda campaign.
A propaganda campaign has four sequential stages.
A propaganda becomes more successful as it proceeds from one stage to the next. It becomes more difficult to reverse the ill effects the propaganda in higher stages.

In India, there are two problems which are influenced by the sustained propaganda from a very long period of time. Here they are identified and the stage of the propaganda in each of these cases is assessed. 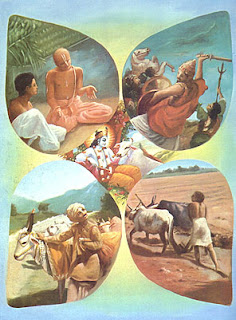 Propaganda against Varnashrama of Hinduism is going on atleast from last 400 years. Propaganda has already reached the 4th stage and we see many Hindus, especially socially active, vouching for the points raised by the anti Varnashrama propagandists. More number of Hindus reiterate and reinforce the allegations and conclusions about Varnashrama in a casusal way even while  addressing topics that are not directly related to Varnashrama in particular and Hinduism in general. Awareness about the allegation is so high (almost 100%) and internalisation of the allegations is so complete that most of the time, there will be no reactions / respose / discussions about these things.
Kashmir
Kashmir as a disputed land and Pakistan and China as parties to it has wider acceptance. Arguments in favor of India is less wi

dely known compared to the arguments in favor of Pakistan. Response is typically high from official circles and it appears as if  there are few takers among the general public. Pakistani / Jihadi allegations against India are reinforced  in most of the discussions about Kashmir in India. The propaganda against Kashmir as integral part of India has reached third stage.
Source: http://medsyn.blogspot.com/2011/02/kashmir-and-varnashrama-problems-due-to.html