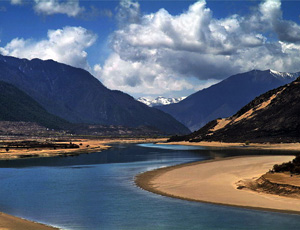 Beijing has formally announced that it would start constructing a dam on the Tsangpo river that flows into Assam as Brahmaputra. The Brahmaputra rises from near Lake Mansarover. After flowing eastwards through Tibet, it takes a U-turn to the south before entering Arunachal Pradesh. The Brahmaputra flows 918km before falling into the Bay of Bengal. China’s plan is to dam the Brahmaputra and divert 200 billion cubic metres of water every year to the country’s north-east regions of Shaanxi, Hebei, Beijing and Tianjin.

Besides India, which raised the construction of a 510 MW dam on the Brahmaputra in talks with the Chinese leadership this week.  India voiced concerns, calling on China to continue sharing data regarding its plans for the Brahmaputra, or the Yarlung Tsangpo as it is known in Tibet. While India and China have set up a joint expert-level group to exchange hydrological data, the absence of a water-sharing treaty means the exchange of information is limited. Thailand, Laos, Vietnam and Cambodia had expressed similar concerns over eight dams being built on the Mekong River.

The Chinese government mounted a defence of its dams on the Brahmaputra and Mekong rivers in reaction to concerns of its seven neighbors.   While China has stressed that its eight dams would help, and not hinder, flood management, the Mekong River Commission (MRC) — represented by Thailand, Laos, Vietnam and Cambodia — has called on China to share more data and be more transparent about its plans. China has been reluctant to join the MRC.

The official Global Times newspaper reported that in China too, some environmental groups and some engineers had voiced concerns over the Brahmaputra dam. “The diversified fauna and flora there have evolved over tens of millions of years and will be damaged. Blocking the river may also overturn the balance of the region’s ecosystem,” said Wang Yongchen of the Beijing-based Green Earth Volunteers.

The newspaper also quoted an engineer with the Sichuan bureau of Geological Exploration and Exploration of Mineral Resources warning that the dam “may not function well at a high altitude, where rivers are likely to be frozen for most of the year” and that the area was “subject to natural disasters such as earthquakes.”

Regardless of these concerns, construction of the dam started on November 12, following the damming of the river on November 8.  After the annoncement, Assam state chief minister Tarun Gogoi said he would request Prime Minister Manmohan Singh to sign a water-sharing treaty with China.  The CM said he would ask the Centre to closely watch developments across the border and seek a team to study the downstream impacts that India will have to face once the dam comes up in China. The study should be carried out for our future safety.

In 2006, when it was first reported that China would build a dam on the river as it flows through Tibet, Gogoi had sought Singh’s intervention to impress upon Chinese authorities to stop damming the Brahmaputra in Chinese territory.  Experts fear construction of a dam on the Brahmaputra in China might slowly turn biodiversity-rich Assam and Arunachal Pradesh into semi-arid states and deplete the groundwater table. Gogoi said he would make a joint effort with his Arunachal Pradesh counterpart, Dorjee Khandu, for drawing the Centre’s attention on the Chinese dam on the river on which Assam’s economy largely depends on.